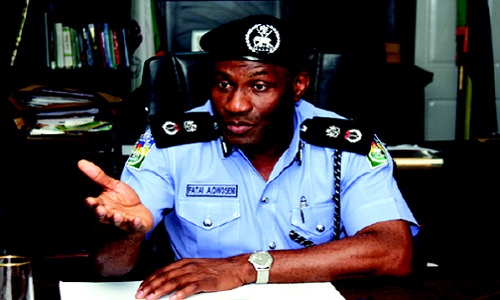 The Lagos State Commissioner of Police, Fatai Owoseni, has vowed to stop at nothing in apprehending robbers who raided banks at FESTAC Town, Lagos on Tuesday.

The robbers numbering about 40 robbed Access and Diamond banks on 4th Avenue.

The incident claimed a mother and her child who were killed by stray bullets from the sporadic shooting by the robbers.

The commissioner said in a statement by the command’s Police Public Relations Officer, Joseph Offor, that residents of the state should go about their normal businesses.

“The Commissioner of Police, Lagos State wishes to reassure the residents of Lagos of their safety and urged them to go about their normal business.

“He has also vowed to stop at nothing in unravelling the perpetrators of this heinous crime”, he said.

Giving the details of the robbery, the statement said that gun battle between the police and the armed robbers forced the robbers to abandon the operation and fled.

“On October 13 at about 8.25 a.m., the Area ‘E’ and the Divisional Police Headquarters both at FESTAC Town received information of sporadic shootings at 4th Avenue FESTAC Town, Lagos.

“In a swift reaction, the Area Commander, Area ‘E’ mobilised a joint Team of Area ‘E’ and Divisional Headquarters, FESTAC that engaged the armed robbers.

“Numbering over 40, dressed in military camouflage and armed with military assault rifles of various calibres, they were robbing Access and Diamond Banks simultaneously.

“The gun battle forced the armed robbers to abandon over N27 million and 240 rounds of 7.62mm live ammunition.

“No life was lost on both sides”, the statement said.

It added that the case had been referred to Special Anti-Robbery Squad for discreet investigation, while security had also been beefed up within FESTAC Town and its environs.