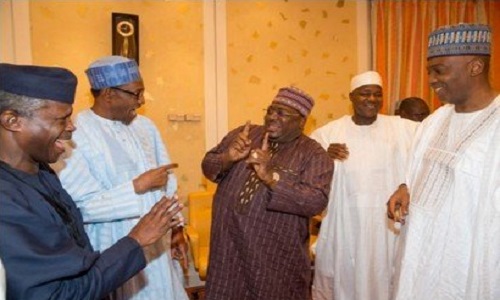 The discussions at the inaugural meeting between President Muhammadu Buhari and the leadership of the National Assembly focused on how to better the lot of Nigerians, Senate President Bukola Saraki on Wednesday evening said.

He said the meeting, which was at the instance of the president, was to devise means of delivering the promises made to Nigerians during electioneering.

The Senate president made this disclosure while speaking to State House correspondents at the end of the meeting held behind closed doors at the First Lady’s Conference Hall inside the Presidential Villa, Abuja.

According to Saraki: “The meeting was an initiative of the President for an interaction with the leadership of the National Assembly.

“It was a very useful session, being the first one. This kind of interaction helps in ensuring smooth relationship between the two arms of government.

“We discussed a number of issues: some of the plans. The general commitment is that yes, the National Assembly has legislators from different parties but now we are representing Nigeria. We have a common goal to see that we work together for the interest of the country as a whole”.

In response to a question of his his ongoing trial by the Code of Conduct Tribunal over alleged false declaration of assets ever came up during the meeting, Saraki said, “We are talking about what will make Nigeria work, we are talking about the promises we made during elections.

“It is normal in democratic setting, from time to time, you see the parliament talking with the executive. That is how to make things work”.

Saraki urged Nigerians to be confident in the present government’s determination to work in their interest even as he promised that the two arms or government were committed to work together for the good of the people.

“What we are taking away is for Nigerians to be confident that government is working. We are committed to work together and it is going to be for the good of Nigerians at large.

“It is a good development. We are all committed to what we are all elected to do: to make Nigeria work”, he said.

On the absence of the Deputy President of the Senate, Ike Ekweremadu, at the meeting, Saraki explained that he was attending a conference outside the country at the time of the parley.

“Two people are not here because they are attending a conference. The Deputy Minority Whip in the House too is not here. It just happened that they are not in the country”, he said.

Saraki and the Speaker of the House of Representatives, Yakubu Dogara, led the lawmakers to the late night meeting with the President.

Those who attended from the House of Representatives included the Deputy Speaker, Yusuf Lasun; and House Leader, Femi Gbajabiamila.