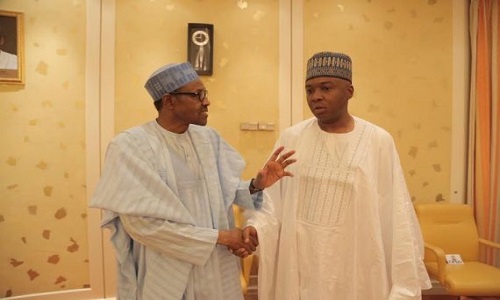 Senate President Bukola Saraki has explained the absence of his deputy Ike Ekweremadu when the leadership of the National Assembly met with President Muhammadu Buhari. According to him, he was not the only one absent.

“Two people are not here because they are attending a conference. The deputy minority whip in the House too is not here. They are not in the country,” he told journalists who asked why the Deputy Senate president who belonged to the opposition party was absent.

Saraki said the interaction would ensure a cordial relationship between the legislature and the executive.

“We discussed a number of issues. The commitment is that yes, the National Assembly has lawmakers from different parties, but we are representing the country.

“We have a goal to ensure we work together for the progress of the country.”

“These are the issues we are talking about and to ensure there are no distractions. The focus is to ensure the executive does things in the interest of the county.

“It is normal in a democratic setting. From time to time, you see the parliament discussing with the executive. This is how to make things work.

“We are committed to working together and it is going to be for the good of the country. It is a good development.”

“We are committed to what we were elected to do, to make Nigeria work.”