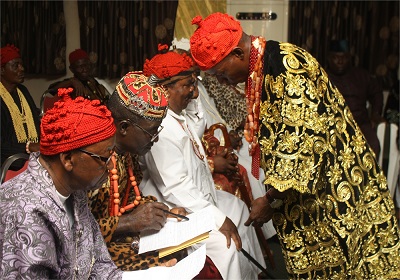 The Publicity Secretary of the All Progressives Congress in Lagos State, Mr. Joe Igbokwe, has joined the call for the abolition of the Eze Ndigbo title outside Igbo land.

The Lagos APC spokesman said the craze for title by Igbo indigenes outside their states of origin was making a mockery of the Igbo tradition and culture.

Igbokwe, who said this in an article titled, ‘Eze Ndigbo title outside Igboland: A needless distraction’, on Sunday, advised the Ohaneze Ndigbo to end the embarrassment caused by the Ndigbo title by issuing a policy paper that compels the Igbo to abide by it.

He said it was unfortunate that politicians outside Igbo land exploit the Eze Ndigbo to their own advantage, especially to win elections.

He said, “A situation where drug kingpins, armed robbers, kidnappers, failed businessmen hide under the Eze Ndigbo title to continue to embarrass us calls for immediate attention and concrete actions. We cannot continue to pretend that all is well when these pretenders sow seeds of discord between our people and the host communities.

“We need to have the courage to do away with this dangerous trend which tends to cause disaffection between us and the host communities across Nigeria. Let us abolish this Eze Ndigbo title outside Igboland for peace to reign”.

Mr. Igbokwe’s statement follows the development in Ondo State, where the Deji of Akure, Oba Kole Aladetoyinbo, banned the Eze Ndigbo title in his domain after a disagreement with the holder of the title in Akure, Gregory Iloehike.

According to Igbokwe, the Deji of Akure and other Yoruba rulers see the holders of the Eze Ndigbo title as a threat to their sovereignty due to the way they “carry themselves about with noise and arrogance”.

Igbokwe said most of the Eze Ndigbo title holders were common traders who needed political power to raise their status both at home and outside Igbo land even as he said some of them were failed businessmen seeking to earn a living and political and economic patronage.

He said, “I suggest that Igbo leaders, especially the Ohaneze Ndigbo, move into action now and stop this nonsense forever. We must produce a paper on it and compel our people to abide by it.

“We must do the needful before it gets out of hand. Our people must care about the feelings of other Nigerians outside Igbo land where they do businesses and must be told in the strongest terms to respect the rules of engagement and rules of business anywhere they are.

“This craze for titles outside Igbo land is making a mockery of our tradition, culture and cherished ideals”.