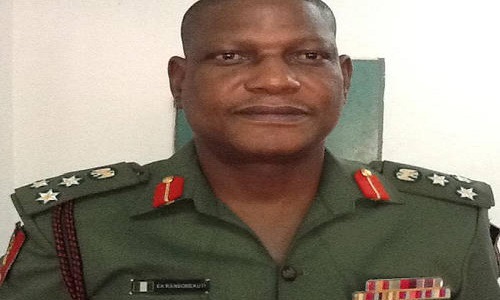 The Nigerian Army has confirmed the dismissal of Brigadier General EA Ransome-Kuti from the army.

Ransome-Kuti was commander of the Multi-National Joint Task Force in Maiduguri, Borno State until his arrest earlier this year for reportedly withdrawing his men from Baga, on the shores of Lake Chad; a move that allowed Boko Haram run riot in the town and surrounding villages, including a military base.

The Boko Haram insurgents later made a propaganda video where they showed off their spoils from the attack on Baga – including the armoury at the base, which was used to store high grade military arms and ammunition for use by troops from Nigeria, Niger and Chad.

The Army, in a statement on Saturday by the Acting Director, Army Public Relations, Col. Sani Usman, also said a general court martial found Ransome-Kuti guilty of “miscellaneous offences relating to service property” and sentenced him to six months imprisonment.

The statement reads: “In reference to media enquiry on the judgment passed by a General Court Martial on Friday at Army Headquarters Garrison, I wish to confirm that one of the accused persons, Brigadier General EA Ransome-Kuti, was awarded the following punishments on the various count charges against him as follows:

“The first count charge, which was ‘cowardly behaviour’, was struck out but he was found guilty on count charge number two which was ‘failure to perform military duties’ and was dismissed from the Nigerian Army.

“He was equally found guilty on count charge number 3 which was ‘miscellaneous offences relating to service property’ and was awarded six months imprisonment”.

Brig.-Gen. Ransome-Kuti’s lawyer, Femi Falana, SAN, has however, faulted the imprisonment of his client, saying he had been in custody for six months and should be released for time served.

An appeal would be lodged, he said, as it was “contradictory” to convict his client of losing equipment but clear him of cowardly behaviour.