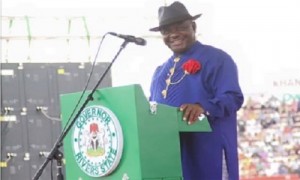 Rivers State Governor Nyesom Wike has reiterated that card readers provided by the Independent Electoral Commission (INEC) malfunctioned throughout the country in the 2015 general elections.

In a broadcast, Sunday, in reaction to the nullification of his election by the Rivers State Elections Petition Tribunal in Abuja, yesterday, Governor Nyesom Wike said that it was common knowledge that wherever the card reader malfunctioned, manual accreditation, which is the only process, recognized by the current Electoral Act, was used to accredit voters all over the country.

He lamented that the State Governorship Election Petition Tribunal nullified his election on the basis of INEC’s alleged infraction of its administrative guidelines on the use of card readers.

WE SHALL PREVAIL AND RETAIN OUR MANDATE

My dear people of Rivers State,

It is with a profound sense of concern and responsibility that I address you over the judgment of the Rivers State Governorship Election Petition Tribunal delivered on Saturday, October 24, 2015, purportedly nullifying my election and return as the duly and lawfully elected Governor of our State.

We all know that on April 11, 2015, Rivers people in their millions joined the rest of the country and enthusiastically participated in electing their Governor and members of the State House of Assembly.

Apart from the reported malfunctioning of the card readers supplied by the Independent National Electoral Commission (INEC), which placed no advantage on any of the contestants, the election took place throughout the State and was adjudged both by local and international observers to be largely peaceful, transparent, free, fair and credible.

Following the success of the election, I was returned as duly and lawfully elected by the INEC, having satisfied all the necessary legal requirements.

However, following the petitions by my friend, the APC gubernatorial candidate and his party, and despite the woeful failure of the Petitioners to discharge the burden of proof with respect to their contradictory, wild and false allegations against the conduct of the election, the State Governorship Election Petition Tribunal nullified my election on the basis of INEC’s alleged infraction of its administrative guidelines on the use of card readers.

So far I am not aware of any State where the election was postponed as a result of failure of card readers. Furthermore, the Court of Appeal in Agbaje v Ambode clearly stated that the partial or non-use of card readers is not the basis for the cancellation of an election.

Yet, against all legal odds and the grains of logic, the Tribunal in its wisdom decided to accord undue legal weight to the straw of statements around the use or non-use of card readers to support its decision in the face of a hopelessly bad case of the Petitioners.

As we all know, our judicial system is built on the doctrine of hierarchy of courts in which lower courts are bound by the decisions of courts higher in hierarchy on the same or similar issues. It is therefore strange for the Rivers State Governorship Election Tribunal to arrive at a decision that negates subsisting judgments of the Court of Appeal or the Supreme Court.

Being an implacable believer in the majesty of our judicial system as the last hope of the common man, I have implicit confidence in the ability of the appellate courts to correct the mistakes of the Tribunal and right the wrong that has been done to our collective psyche and aspiration.

Accordingly, I have since instructed my team of lawyers to immediately commence the appeal process and have the decision of the Rivers State Governorship Election Petition Tribunal upturned for good.

At this point, I appeal to all our supporters across the state and beyond to remain calm and go about their legitimate duties in a peaceful manner. There is no cause for alarm.

By virtue of the Constitution and the Electoral Act, I am still your Governor and will remain your Governor until the exhaustive conclusion of the appeal process at the Supreme Court.

Therefore, be assured that your mandate, which you freely gave to the Peoples Democratic Party and my humble self, is intact, safe and secure. God will not allow your mandate to come to naught.

I wish to thank the people of Rivers State for the unwavering support I have enjoyed from you since the beginning of the struggle to this moment. I am highly humbled with the show of solidarity from all and sundry and in particular, the confidence in our ability to move the State forward, and the overwhelming satisfaction with what we are already doing as our government to reposition the State.

I wish to further assure you that my team and I will not be distracted by this minor irritation. We shall remain focused on our vision and continue to deliver on our fundamental promises on improving security, massive development of infrastructure and socio-economic empowerment in Rivers State.

Finally, be assured that by the special grace of God, we shall ultimately prevail over our adversaries, retain our mandate and return the glory to God Almighty our Maker and Refuge.

Thank you and May God continue to bless Rivers State.