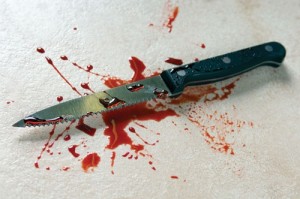 A 60-year-old single mother, Miss Kehinde Adeniyi has been arrested and charged before Isolo Magistrates’ court for allegedly using a table knife to cut off her neighbour’s ear in Lagos State, western Nigeria. The victim, Chigozie Chukwu suffered his fate after a disagreement between his wife and Adeniyi when he was not around. The incident happened at 24, Mohammed Sefiu street, Ago Palace Way Okota, Lagos where they reside. P.M.NEWS learnt that the two families have been at loggerheads which led to a strained relationship despite the fact that they are living in separate flats.

Adeniyi, who hails from Ijebu in Ogun State, is single and has many children, while Chukwu is also married and has children and hails from the eastern part of Nigeria.  Trouble started after Chukwu’s wife, Anita, had a quarrel with Adeniyi. According to Adeniyi, Anita called her a prostitute because she was a single mother with children. This did not go down well with Adeniyi who planned to confront Anita on that fateful day and when she did not locate her, she transferred her aggression to her husband.

On the day the incident happened, Adeniyi reportedly attacked Chukwu from behind with a table knife. She allegedly cut off his right ear and threw it away.  The victim who started bleeding profusely was rushed to a hospital for treatment.  The matter was reported to the police and Adeniyi was arrested and taken to court for the alleged offence. She was charged with inflicting bodily injury by using table knife to cut off Chukwu’s ear.

She pleaded not guilty.

The , Inspector Abbass Abayomi informed the court about the seriousness of the injury the victim sustained and presented the table knife as exhibit before the court.  The presiding Magistrate, Mrs O. A. Adedayo granted her bail in the sum of N50,000 with two sureties in like sum. She was remanded in prison custody pending when she will perfect her bail condition. P.M.NEWS gathered that Adeniyi is making efforts to settle the matter out of court.