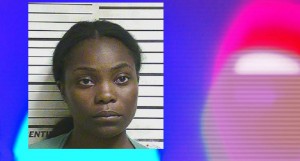 A woman has been charged to court for attempted murder after she intentionally stabbed her growing son multiple times as a way of hurting her husband. 26-year-old Zimbabawean woman, Nomatter Gava-Hudson stabbed her son three times in the abdomen in Mississippi on Monday, October 5, during an argument with her husband.

According to Police spokesman Sgt. Damon McDaniel, investigators learned that an argument took place between Gava-Hudson and her husband, the child’s father, during which Gava-Hudson became “belligerent,” brandished a knife and intentionally stabbed the child.

The child was taken to a local hospital and later transferred to the University of South Alabama Medical Centre where he was listed in stable condition Wednesday afternoon.

The 26-year-old mother appeared in court earlier this week charged with attempted murder and is being held on a $1 million bond. She could be deported if she’s convicted of attempted murder. The hearing before Judge Brandon Ladner on Monday lasted less than 10 minutes.