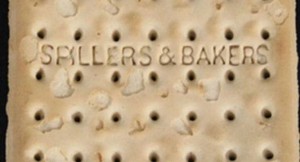 A BISCUIT that survived the sinking of the Titanic and has been described as the most expensive in the world has sold for £15,000 at auction. A photo of the iceberg that is believed to have sunk the cruise liner fetched £21,000 at the same auction today. Scoop has more:

Both went under the hammer at Henry Aldridge & Son auctioneers in Devizes in Wiltshire. And the biscuit sold for £5,000 more than it was expected to go for. The Spillers and Bakers ”Pilot” biscuit survived the sinking of the Titanic in 1912 in which around 1,500 people died. It was part of a survival kit stored within one of the ill-fated ocean liner’s lifeboats and was kept as a souvenir.

The biscuit was kept by James Fenwick, who was a passenger onboard the SS Carpathia, which went to the aid of survivors from the ship. He put the sweet snack in a Kodak photographic envelope complete with the original note, which stated ”Pilot biscuit from Titanic lifeboat April 1912”. ”It is the world’s most valuable biscuit,” auctioneer Andrew Aldridge said. ”We don’t know which lifeboat the biscuit came from but there are no other Titanic lifeboat biscuits in existence to my knowledge.

”It is incredible that this biscuit has survived such a dramatic event – the sinking of the world’s largest ocean liner – costing 1,500 lives. ”In terms of precedence, a few years ago a biscuit from one of Shackleton’s expeditions sold for about £3,000 and there is a biscuit from the Lusitania in a museum in the Republic of Ireland. ”So we have put an estimate of between £8,000 and £10,000 which makes it the most valuable biscuit in the world.”