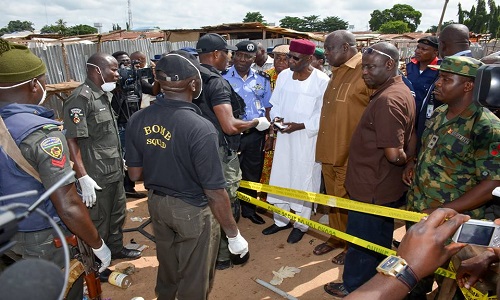 A Presidential delegation led by the Secretary to Government of the Federation, Babachir David, has visited victims of Friday’s bomb blast at the Specialist Hospital and Federal Medical Centre in Yola, Adamawa State.

This is even as the casualty figure of Friday’s bomb blast has risen to 33​.

The SGF, while commiserating with the people and government of the state, said the Federal Government is saddened by the continuous killing of Nigerians by terrorist groups.

“We are doing everything possible in conjunction with the military to fight insurgency. We are positive that this madness will end soon”, Mr. David, an indigene of Adamawa said.

He also urged the people of the state to always be vigilant, saying “these bad elements are living with us and that they can be fished out if we are mindful of our environment”.