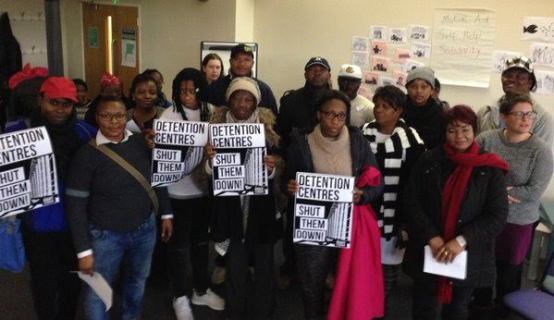 Their plan didn’t work as a plane carrying 500 Nigerians arrived Murtala Mohammed International Airport, Lagos this morning. According to a UK campaign group, Unity Centre, on Tuesday, Nov. 24, two people reportedly glued themselves to the gate of an immigration centre in an attempt to stop the departure of a flight from the UK to Nigeria and Ghana. The two people were among anti-deportation activists gathered to protest at Colbrook immigration removal centre, near Heathrow airport, in an attempt to block a bus carrying detainees from leaving.

The passengers were being transported to Stanstead Airport to board a flight bound for Nigeria and Ghana. The privately chartered plane was due to depart at 10.30pm on Tuesday, for Nigeria, the group said. Police were at the scene on Tuesday evening for around five and a half hours although no arrests were made, and London Fire Brigade also sent a fire engine to the scene. A Metropolitan police spokesman said:

“There were a small number of demonstrators in attendance at the immigration centre who had been there since 5.30pm. “We were on the scene with the fire brigade in a monitoring role and there have been no arrests,”