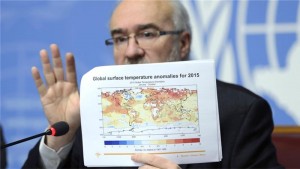 Aljazeera – This year is likely to be the hottest on record, the UN’s weather agency has warned ahead of a global climate summit starting in Paris next week. Global average surface temperature in 2015 is expected “to reach the symbolic and significant milestone of 1C” above the pre-industrial 1880-1899 era, the World Meteorological Organization (WMO) said on Wednesday.

The group said a combination of a strong El Nino and man-made global warming was behind the rise. The years 2011-2015 were also the warmest five-year period on record, with many extreme weather events – especially heatwaves – influenced by climate change, the WMO said. “This is all bad news for the planet,” said Michel Jarraud, director-general of WMO, warning that inaction on climate change could see global average temperatures rise by 6C or more.

“You have scenarios assuming very strong decisions, very quick and sharp reduction of greenhouse gases, and you have other scenarios with business as usual, where you end up with predictions of additional warming of five, six degrees, maybe even more. That will very much depend on the decisions [in Paris].”