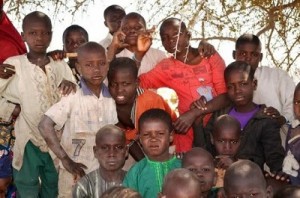 Speaker of the House of Representatives, Yakubu Dogara, yesterday, said 68 percent of Internally Displaced Persons (IDPs) in Nigeria were children.

Speaking at the sensitisation workshop and launch of UNHCR hand book, “On Internal Displacement for Parliamentarians,” Dogara said statistics from the UNHCR showed that 68 percent of IDPs in Nigeria were children, adding that there had been about 60,000 births in IDP camps so far.

“We need to further explore the theme of this handbook for parliamentarians, which is ‘Internal Displacement: Responsibility and Action’, in a nutshell, who and what is responsible for internal displacement and what action is being taken by relevant authorities to address the problem,” he said.

“For our purposes, I think we should adopt the description of IDPs as ‘persons or group of persons who have been forced or obliged to flee or leave their homes or places of habitual residence, in particular as a result of or in order to avoid the effects of armed conflict, situations of generalized violence, violations of human rights or natural or human-made disasters, and who have not crossed an internationally recognized state border.’ (Article 1(k) of the Kampala Convention).

“Large scale development and environmental projects can also generate IDPs. What is clear from the above definition is that IDPs are citizens of our country. They are not refugees from another country.

“They are our constituents, some of who voted us into office. As legislators, we have a duty and responsibility to care for them, protect them, assist them, provide for their needs, their welfare and to advocate on their behalf.”

“To be displaced or uprooted from one’s home is one of the most degrading and humiliating experiences that can befall any human being.

“They are very vulnerable and are exposed to all forms of exploitation and misery, women and female children are sometimes subjected to sexual abuse, and trafficking.

“Access to money and work is severely limited or non-existent. Statistics from the UNHCR show that 68% of IDPs in Nigeria are children and there are so far about 60, 000 births in the IDP camps.

“The National Assembly has made its own contributions to the fight against terrorism and internal displacement, over the years.

“On the fight against Terrorism, we should recall that the National Assembly speedily passed both the Terrorism Prevention and the amendment Acts to aid the executive in its anti terrorism measures.

“The House is also currently processing a Bill to consolidate the anti – terrorism legislations into one document for ease of use and reference”.

“The National Assembly has always supported all budgetary requests from the Executive to fight terrorism.”

“The 8th House of Representatives and indeed the 8th National Assembly is also ready and willing to provide the legislative support that may be required of it in this regard”.

On the issue of Internally Displaced Persons, Dogara said: “Apart from creating a Standing Committee by the House of Representatives, a Resolution, sponsored by me and many other members, was recently adopted by the House, which among other things; requested Mr President to set up the machinery for the establishment of the North East Development Commission and the convening of a Donor Conference or Summit for the North East region which will assist in solving the problem of IDPs.”