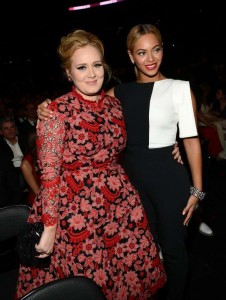 Multiple award winning singer, Adele has come out to clear rumors that she turned down a collaboration request from pop diva, Beyonce.

Reports claimed that ‘Hello’ crooner said no to a duet with Queen Bae after Jay Z’s wife allegedly requested for one.

However, in her new interview with Zane Lowe on Beats 1 radio show, Adele addressed the reports.

“There’s a rumour going round that I turned Beyoncé down. Which I would never be so disrespectful as to do,” she told the radio. Adding that, “I’d never disrespect her like that, obviously, like, Queen B ’til the day I die.”

Well, we are grateful for that because a collaboration between these two would be explosive!

Meanwhile, back in October we reported that legendary musician Phil Collins claimed the young British songstress refused to do a duet with him even after she contacted his team that she would love a song with him.

“She’s a slippery little fish… She got hold of me and asked if I would write with her. She gave me a piece of music to finish and at first I didn’t know if I’d failed the audition as I didn’t hear back from her,” Collins told Q Magazine