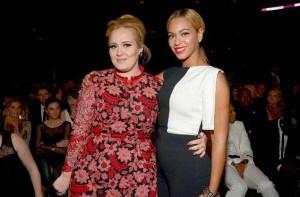 Reports say that multiple award winning British singer, Adele, has turned down a collaboration with Beyonce.

It comes as a shock that anyone would turn down an opportunity for a duet with Beyonce.

Adele who is a British singer and songwriter who graduated from the BRIT School for Performing Arts and Technology in 2006, was given a recording contract by XL Recordings after a friend posted her demo on Myspace the same year.

According to these reports, the ‘Halo’ singer has been chasing Adele for a year but was still turned down.

“Bey has been asking Adele for a year to join forces,’ an alleged source told Heat magazine. ‘She went into the studio with Adele at the end of last year and tried to convince her to collaborate on a track. Adele turned down the offer, so now Beyonce is putting the song on her new album instead, which everyone is saying will drop before the end of the year.”..

Adele, whose upcoming album, 25, is due in stores on November 20, has revealed that she does not like being entangled in fame.

During an interview, in which she was the cover girl for ID magazine, she said:

Adele went on to add that: “It’s basically a bit like Stars In Their Eyes when you go into the smoke and you come out as someone else. I get worried of them looking at me going into the smoke and never coming out. It’s a bit toxic, fame. I’ve got enough toxins in me body, I don’t need any of that!”.