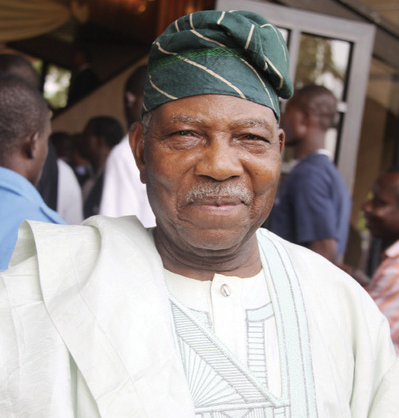 The apprehension that greeted the sudden resignation of the National Leader of the Pan-Yoruba group, Afenifere, Pa Reuben Fasoranti, has been doused with the withdrawal of the letter by the elder statesman.

At an emergency meeting at Fasoranti’s Ijapo, Akure home in Ondo State, members prevailed on the Afenifere leader to withdraw his resignation.

They vehemently rejected his resignation, maintaining that Fasoranti had performed creditably in running the group’s affairs.

In his resignation letter, Fasoranti lamented that the core values and vision of Afenifere had been eroded over time and the group had missed its crucial target of securing true federalism for Nigeria which would in turn guarantee autonomy for the Yoruba people.

At the meeting yesterday which lasted almost six hours, were prominent members of the organisation, including Ondo State Governor Olusegun Mimiko.

Other Afenifere leaders, who prevailed on the Afenifere leader to withdraw his resignation letter were Chiefs Ayo Adebanjo, Olu Falae, Seinde Arogbofa and Supo Sonibare, among others.

The Yoruba leaders appealed to the elder statesman to continue in his service to the Yoruba race and the country.

Mimiko, who arrived at the meeting at 11am, waited till it ended about 4pm.

The National Publicity Secretary of Afenifere, Yinka Odumakin, who briefed reporters at the end of the meeting, said the organisation rejected Fasoranti’s resignation after an exhaustive deliberation, which lasted hours.

According to him, “the leaders of the organisation unanimously agreed that Pa Fasoranti should continue as leader and the elder statesman agreed”.

Odumakin said Afenifere members appreciated the work done by Fasoranti since he took over and want him to continue.

“We rejected Baba’s resignation and pleaded with him to continue.

“He agreed to continue as our leader at the end of the day and this is a good development for Afenifere and the Yoruba.

“Afenifere appreciates the good work Pa Fasoranti is doing for the Yoruba, even at his age.

“He is a man of wisdom and principle, who has contributed greatly to the unity and development of Yoruba land.

“Fasoranti remains the leader of Afenifere, following the withdrawal of his resignation.

“He has promised to ensure the re-launch of Afenifere in Nigeria.

“The organisation is united. There is no crisis in Afenifere and the house of Oduduwa is united”.