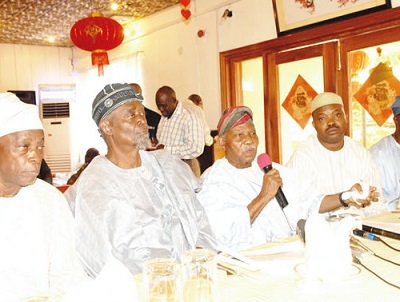 Leader of the apex Yoruba socio-cultural organization – Afenifere, Pa Reuben Fasoranti, on Sunday, resigned his leadership of the group, claiming that its founding fathers’ goals “are being gradually eroded”.

In a letter personally signed by him, Fasoranti said he could no longer reconcile himself with how the group is drifting.

The elder statesman, who became the group’s leader after the demise of Chief Abraham Adesanya, said his resignation was with immediate effect.

The socio-cultural group was the leading and most formidable voice of the Yoruba ethnic nationality in the past until its polarisation led to the emergence of the Afenifere Renewal Group (ARG), under Mr Wale Oshun.

In the letter addressed to the group’s Secretary-General, Chief Seinde Arogbofa and other leaders, including Chief Ayo Adebanjo, Sir Olanihun Ajayi, Chief Olu Falae, Chief Supo Sonibare and state chairmen, Fasoranti alleged that some members were not loyal.

The letter reads: “Our organisation, Afenifere, was formed in 1951 under the leadership of our leader, Chief Obafemi Awolowo.

“The organisation was formed to serve as an umbrella to be used to actualise the dream of a great nation and the Yoruba.

“Over the years, the Yoruba have tried to focus on a common goal. Chief Awolowo tried to ensure the oneness of our people with a lot of efforts, notwithstanding challenges he faced in the process. Unfortunately, he passed on without actualising this dream.

“The mantle of leadership fell on the late Pa Adekunle Ajasin, the late Pa Adesanya and me. As events unfolded in the past years, the focus and goals of the founding fathers were gradually eroded.

“This made it a Herculean task for members to work in unity. Several efforts were made to ensure actualisation of our goals, but it appeared we have not succeeded. This is basically due to reasons best known to members.

‘’The support of a leader, who promised to implement this report was not a mistake and inevitable despite all public insinuations.

“Considering my age, efforts and selfless dedication to my country, my state (Ondo), my parties, my past leaders and members in Afenifere in Nigeria and the Diaspora, I inform you all that I have decided to step aside as leader of Afenifere”.