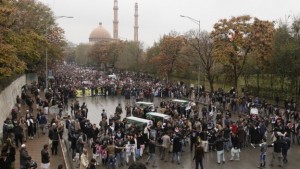 Afghan security forces have fired warning shots into the air at a protest in Kabul, injuring seven people, according to officials. Police fired the shots to disperse protesters marching outside the presidential palace. Thousands are protesting against the recent abduction and killing of seven civilians from the Hazara ethnic minority. It is not clear who carried out the killings.

The bodies were found in the southern province of Zabul where fighting between Taliban factions has escalated recently. Some of the victims had had their throats slit. The marchers carried the coffins of the dead through the streets of Kabul in the pouring rain.

“Today they kill us, tomorrow they kill you,” some chanted. Others carried banners bearing photos of the victims and shouted “Death to the Taliban”. The murdered Hazaras included four men, two women and a nine-year-old girl.

Officials said they were among dozens of Hazaras kidnapped in a number of abductions dating back to last year. Afghan security forces have reportedly stopped live coverage of the protests by private television channel Ariana News TV.