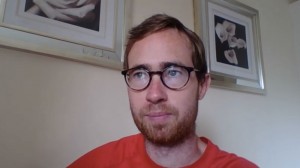 A 28-year-old British man, most notable for his 2006 victory on the quiz show Countdown, tracked down a Scottish teenager who’d written a negative review of his self-published novel and shattered a bottle of wine on the back of her head. The aspiring author pleaded guilty to the 2014 assault in a Scottish court Monday, the Mirror reported.

According to Gawker, Richard Brittain had posted an unfinished version of his book, The World Rose, on Wattpad, an app where amateur writers post their stuff and others review it. (Wattpad is perhaps best known as a fanfiction hub—One Direction fanfic author Anna Todd landed a book deal last year after posting her Harry Styles story there.)

Brittain claimed the early reception for The World Rose was strong, blogging that “The praise I received was remarkable and made me feel great; I was compared to Dickens, Shakespeare, Rowling, Raymond E Feist and Nora Roberts.” But he also complained about bad reviews from “idiots” and “teenagers.”

One of those teenagers was Paige Rolland, the eventual victim of Brittain’s savage bottle attack. Her entire harsh (but fair) review has been preserved on Amazon, but this passage really sums up her criticism: As a reader, I’m bored out of my skull and severely disappointed in what I might have paid for. As a writer (albeit an amateur one) I’m appalled that anyone would think this was worthy of money.