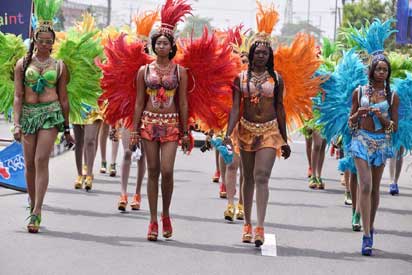 Governor of Cross River, Prof. Ben Ayade on Saturday inaugurated the 2015 dry run to signify the beginning of the 2015 annual Calabar Carnival.

Speaking at the occasion in Calabar, Mr. Ayade said the celebration marked the 11th anniversary of the carnival.

The governor, who was represented by his deputy, Ivara Isu, described the carnival as the largest street party in Africa.

He said the carnival had promoted talent, creativity and united the people of Cross River and Nigeria in general.

“We promised to make this year’s carnival the best and fun loving ever”, the governor assured.

He lauded the efforts of Cross River people and the participants for coming out en mass for the dry run.

The governor used the occasion to invite tourists from all over the world to visit Calabar and have an exciting experience of the carnival.

Gabriel Onah, Chairman of Calabar carnival Commission, said that the carnival has continued to grow from strength to strength with new innovation added to it yearly.

“We are celebrating 11 years of Cross River carnival, 11 years of oneness and unity, 11 years in showcasing what we have and what we are”, Mr. Onah said.

The News Agency of Nigeria (NAN) reports that the 12 kilometres carnival walk will pass through Mary Slessor way, IBB road, Marian, MCC road and will terminate at the U.J Esuene stadium.

NAN also reports that participants were beautifully dressed in different attires, while adequate security was mounted in all the carnival routes.