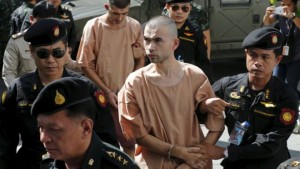 Two men have been charged by a military court in Thailand in connection with the bombing of a shrine in the capital Bangkok. Twenty people were killed in the attack on the Erawan Shrine in August. Authorities say Bilal Mohammed, also known as Adem Karadag, and Yusuf Mieraili have both confessed to their roles in the blast.

The two suspects have been indicted on 10 charges, including murder, but not terrorism. A lawyer for one of the men told the Reuters news agency that the charges included premeditated murder, illegal possession of weapons, and murder.

“The court has accepted the 10 charges that prosecutors formally brought against the two men,” said lawyer Schoochart Kanpai. The two have been in custody for nearly three months.  Documents sent by prosecutors to the court said both men were Chinese nationals from the Muslim Uighur minority.

China has long faced criticism for the perceived harsh restrictions it places on religion and culture in Xinjiang, where the majority of Uighurs live.

Thailand recently found itself in the spotlight following its forced repatriation of more than 100 Uighurs to China. Police have released warrants for a total of 17 people over charges stemming from the attack. They believe many have fled the country.