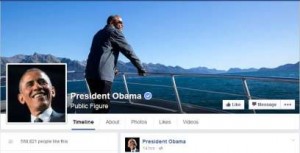 The first Black US President, who is also the most-followed world leader on Twitter, joined Facebook on Monday, November 9 and immediately posted a lengthy message about climate change.

“Hello, Facebook! I finally got my very own page. I hope you’ll think of this as a place where we can have real conversations about the most important issues facing our country… We’ve got to preserve this beautiful planet of ours for our kids and grandkids and that means taking serious steps to address climate change once and for all,” he wrote.

He went on: “Now, we’ve made a lot of progress to cut carbon pollution here at home, and we’re leading the world to take action as well. But we’ve got to do more. In a few weeks, I’m heading to Paris to meet with world leaders about a global agreement to meet this challenge. I hope you’ll join me in speaking out on climate change and educating your friends about why this issue is so important.”

The President followed his first post with a video of himself taking a stroll around his backyard – which also happens to be a national park – something he said he does at the end of every day.

“A lot of what I do is just think about how I want to make sure that the beauty of this particular national park – but also national parks all across the country, and our planet – are going to be there for [daughters] Malia, Sasha, their kids, their grandkids, for generations to come,” he said in the clip, before urging all Americans to help save the planet.