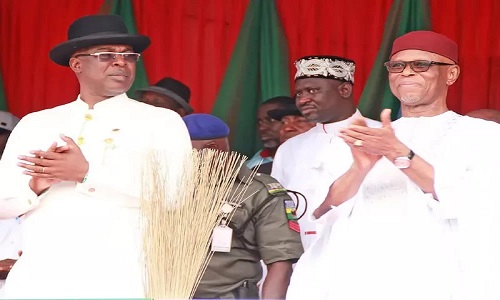 The chances of All Progressives Congress candidate in the December 5 governorship election in Bayelsa State, Chief Timipre Sylva, was brightened on Thursday as the governorship candidates of the All Progressive Grand Alliance and nine other political parties in the state, stepped down for him.

The candidates of the 10 parties led by APGA’s governorship candidate, Chief Christopher Enai, made this known on Thursday when Sylva/Igiri campaign train made a stop at Ekeremor, the local government area of the Minister of State (Agriculture), Senator Heineken Lokpobiri.

Their withdrawal from the race was accepted by the state APC Chairman, Chief Tiwei Orunimighe.

Sylva and his entourage were received by a mammoth crowd of APC supporters who had thronged the open field at Ekeremor town as early as 6am.

The entire town was also in a festive mood as party faithful and sympathizers were treated to musical renditions by popular Ijaw musician, Barrister Smooth, just as comedians were on hand to liven the atmosphere with their rib-cracking jokes.

APC flags were hoisted in strategic areas of Ekeremor community.

Enai, who refused to give the names of the other parties’ candidates, said the APC flag bearer was the best for the governorship post.

He said, “My withdrawal is not that I am leaving APGA entirely. I want a situation where we can achieve a new Bayelsa and I believe that the APC can do it.

“My supporting the APC is not that I do not have followers in APGA but my reason is that I want to support my brother, Timipre Sylva, because this is the time to face the reality in Bayelsa politics.

“I must say that I am in love with the APC. So, I am using this opportunity to call on our people to vote for the real change and for good governance.

“Of course, I am not the only candidate defecting, I know them all but I am not in the right position to mention them for publication. Right now, out of the 20 political parties in the race, about 10 have stepped down”.

In his remarks, Sylva said it was the birth of a new dawn in Bayelsa and he urged the people to embrace change in order that the state could move to the next level of socio-economic and political development.

He promised to abolish hunger if voted into power, adding that Bayelsa State was too blessed for the people to live in penury.

The former governor pledged that if voted into office for a second tenure, his administration would not shortchange the people but would run a transparent government.

“I will link Sagbama to Ekeremor by road. I want to assure the people of Bayelsa that I will not play ‘419’ because some people are doing ‘419’ with the road. I will truly empower Ekeremor people and all the areas in Bayelsa State”, Sylva pledged.