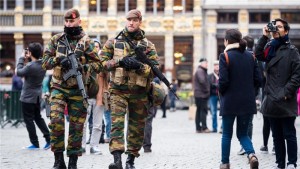 Belgium raised its attack alert in the capital to the highest level on Saturday, warning the public to avoid crowds because of a “serious and imminent” threat.  The move was made in Brussels after a meeting of top ministers, police and security services. “The advice for the population is to avoid places where a lot of people come together like shopping centres, concerts, events or public transport stations wherever possible,” a spokesman for the government’s crisis centre said.

The level for the whole country was raised a week ago following the Paris attacks to level three of the highest four, implying a “possible or probable” threat. Previously, only certain sites, such as the US embassy, were at level three. A statement on the crisis centre’s website called called on local officials to cancel major events and football matches over the weekend.

Metro services in Brussels have also been cancelled over the weekend, as the government increases its security presence in the city. Al Jazeera’s Emma Haywood, reporting from Paris, said the move was the highest state of alert that Belgium had ever put in place.