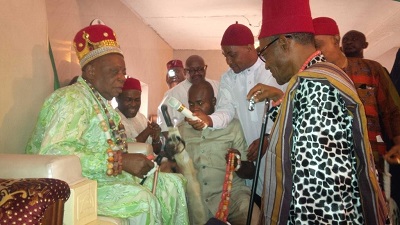 Political and opinion shapers in the South-East, including state governors, on Sunday agreed to set up a committee to dialogue with pro-Biafran groups and the Federal Government over the rising agitation for Biafra.

This was part of the decision taken at a meeting of South-East Elders, which was convened by the state governors in Enugu.

A communique issued after the meeting, which was also attended by members of the National Assembly, some former governors, and other elder statesmen from the South-East zone, said the proposed committee would parley with the two major pro-Biafran groups – the Movement for the Actualisation of the Sovereign State of Biafra, and the Indigenous People of Biafra.

MASSOB and IPOB are the leading voices for secession at the moment and their protests in recent weeks, has led to a lockdown of major cities of the South-East and South-South.

The agitation followed the arrest and detention of the leader of IPOB and Director of Radio Biafra, Nnamdi Kanu.

Reading a communique after they met for several hours at the Enugu State Government House, the Imo State Governor, Rochas Okorocha, said, “After a compassionate review of the recent MASSOB/IPOB agitation in the country, it was resolved that a committee be set up to dialogue with MASSOB/IPOB as well as with the Federal Government with a view to finding a lasting solution to the issue”.

The communique was however, silent on when the proposed committee would be set up.

Okorocha added that the meeting resolved to send a delegation of South-East Elders to meet President Muhammadu Buhari over the “marginalization” of the zone, as well as other outstanding socio-economic issues that hinder development in the region.

“The elders also examined other issues including poor state of infrastructural facilities in the South-East, marginalization in federal appointments and other socio-economic issues that impact on the economic development of the South-East and resolved to support the decision of the South-East Governors to set up an Economic Council and urged them to interface with the Federal Government on remedial measures.

“A delegation of the Elders of the South-East was mandated to meet with the President of the Federal Republic of Nigeria”, the communiqué said.

It added that the governors resolved at the meeting that a committee should immediately be set up to address the “impasse on Ohanaeze leadership”.

Due to the crack in the leadership of the pan-Igbo socio-political organization, the organizers of the meeting did not invite either faction of Ohanaeze, as doing so would confer legitimacy on the invited group.

MASSOB and IPOB were equally absent at the South-East Elders’ meeting.