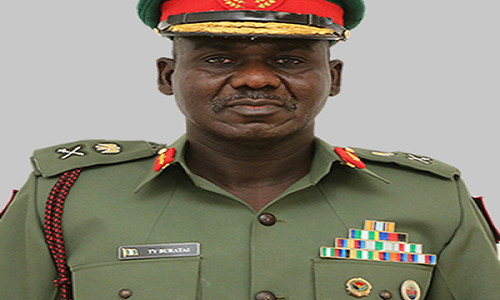 The Nigerian Army said it has arrested two soldiers with intent to launch a smear campaign against the Chief of Army Staff, Major-General Tukur Buratai and the ongoing war against Boko Haram.

The Army spokesman, Colonel Sani Usman, said in a statement yesterday that the army is also a prime target of what he called “disinformation campaign” by the officers, whose identities were not disclosed.

The statement titled: “Alert On Impending Smear Campaign By Some Disgruntled Elements”, said preliminary indications established that the plans involved the use of social media to to discredit Gen. Buratai and the Nigerian Army.

“They intend to execute this plan as from next month, December 2015, using all means possible; lies, fabricating baseless stories, falsehood, publishing and broadcasting them through some designated print and electronic media, most especially the Social Media.

“The Nigerian Army has identified some of the officers involved and their collaborators; the officers are being investigated to unravel their motive and motivation.

“It is imperative to note that the fight against Boko Haram terrorists is at critical stage, any attack on the Nigerian Army will be counter-productive and serious distraction on the fight against terrorism and insurgency.

“The public and the media are please requested to be careful and wary of these disgruntled persons; they should please disregard any such material from them.

“The Nigerian Army holds the media in high esteem; the Nigerian media is one of the best in the world and have consistently been partners in progress and very supportive, understanding and cooperative with the Nigerian Army especially in the fight against terrorism and insurgency.

“This at times comes at the risk of their personal safety and corporate existence; the role of the media in nation building and conflict resolution, peace building and social responsibility is never in doubt.

“With this and so many other things, the media, especially the online publications, should not be involved or lured into such dubious campaign. As always, our doors are open for clarification, enquiries and reactions on any issue concerning the Nigerian Army before filing or publicizing such stories.

“Consequent upon this, we are calling on all Nigerians not to fall prey to their campaign of calumny. This is because their evil intents would be distractive and capable of reversing the gains on the fight against Boko Haram terrorists”.