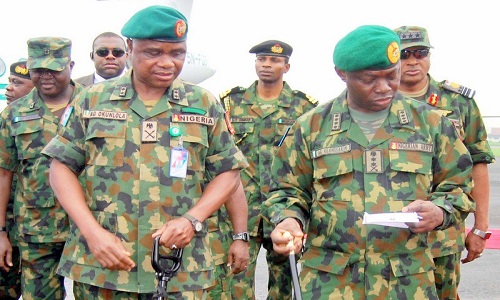 With the December deadline set by President Muhammadu Buhari for Boko Haram to be wiped out, the Chief of Defence Staff (CDS), General Gabriel Olonisakin, yesterday said Chad was yet to deploy troops in certain areas of operations designated for the Multinational Joint Task Force (MNJTF).

The MNJTF is a formation of troops drawn from Nigeria, Chad, Niger, Cameroon and Benin Republic, with headquarters in N’djamena, the capital of Chad. It has at the core of its mandate, fighting Boko Haram within member countries’ territory and the Lake Chad Basin Commission (LCBC) area.

Speaking with reporters at the Defence Headquarters, Abuja Thursday, General Olonisakin disclosed that Chadian troops were yet to be deployed as part of about 8,700 troops that was supposed to make up the Force.

Olonisakin spoke on the sidelines of the visit of the Chief of Defence Staff (Niger Republic), General Seyni Garba, who was at the Defence headquarters in continuation of talks on Nigeria-Niger bilateral efforts in fighting Boko Haram.

He explained that: “The commander of the Multinational Joint Task Force has gone round the countries involved in this operation to ensure that they are well deployed in their location.”

He further stated that: “Most of the troops have been deployed especially from Niger which is in the same sector with Nigeria and they are performing their roles effectively…”

Also fielding questions from journalists, the Nigerien Chief of Defence Staff (CDS) General Garba said: “We are very optimistic that insurgency can be defeated in the next one month. It is already a year now, Boko Haram have lost territories they were previously in control of”.