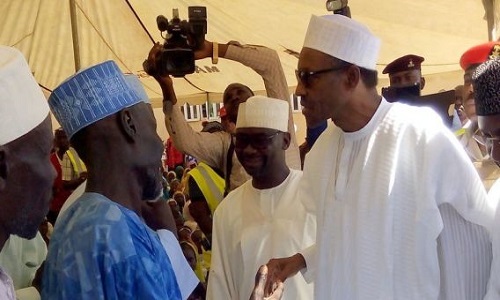 Nigerians displaced by the Boko Haram insurgency in Adamawa, Borno and Yobe States have been given the assurance that government is doing everything possible to ensure they return to their homes as soon as possible.

President Muhammadu Buhari, who gave the assurance on Friday when he visited the Makhio Internally Displaced Persons’ camp in Yola, Adamawa State, said “My government is doing everything possible to rebuild your homes, schools hospitals and roads to enable you go back to your homes”.

He further assured them that “Boko Haram will soon be a thing of the past”.

“I know that most of you are farmers and your farm land have been destroyed but let me assure you that you will soon go back and continue in your farming”, the president added.

Mr. Buhari also commended the Adamawa State government for the support it has given the displaced persons, assuring that the Federal government would soon come to the aid of the state.

Earlier, Governor Jibrilla Bindow told the president that the state was feeling the weight of the number of IDPs it has to cater for, saying “As I speak now about 10,000 IDPs from Central Africa Republic are expected in Adamawa in three days’ time”.

The Director General of NEMA, Sani Sidi, while welcoming President Buhari to the Makhio camp, said “in Adamawa we have so far received 15,754 internally displaced and we are expecting about 10,000 more”.

President Buhari is in Yola for the wedding of former Vice President Atiku Abubakar’s daughters and son.