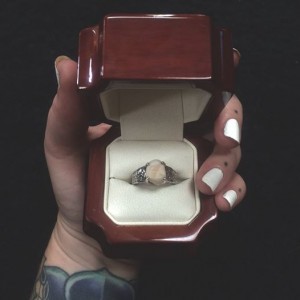 A California woman whose photo of her engagement ring beset with her finance’s wisdom tooth went viral says “diamonds are so overrated.” Carlee Leifkes of Orange County, Calif., said her relationship with fiance Lucas Unger has been unconventional ever since they first met at a music festival in his native Canada. “So incredibly excited to marry my best friend, the man who knows that his wisdom tooth means more to me than a diamond,” Leifkes wrote in a Facebook post. “We have never been the ‘traditional couple,’ why the heck start now?”

Leifkes told Buzzfeed the ring, which bears one of the wisdom teeth removed from Unger’s mouth at the age of 17, means more to her than a diamond. “When we’d spoken about it, I’d said that diamonds are so overrated,” she said. “My birthstone is a diamond. I don’t need one to prove how much someone loves me. He’d already moved all the way from Canada to do that!” Leifkes said the viral photo has resulted in a lot of feedback, some positive and some negative.

“We thank everyone for their continued support and love and cannot wait to share photos of our wedding with those who appreciate the love we share! And for those couples out there who are looking to stray away from the traditional diamond ring, remember: Diamonds are not always a girls best friend, your significant other is and don’t let other people tell you otherwise!” she wrote on Facebook.