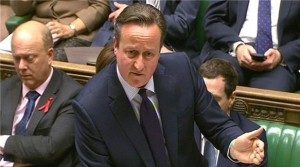 Britain should join air strikes against the Islamic State of Iraq and the Levant (ISIL) in Syria, Prime Minister David Cameron has said. Cameron attempted to persuade politicians on Thursday to back action in parliament, arguing the Paris attacks have given new urgency to the fight against ISIL.

He told the House of Commons that US President Barack Obama and French President Francois Hollande had urged Britain to join the military campaign. “These are our closest allies and they want our help,” he said.

Cameron said if Britain didn’t act after ISIL-claimed attacks in Paris that killed 130 people, the UK’s allies might well ask, “if not now, when?”

“We can’t wait for a political transition, we have to hit these terrorists in their heartlands right now. And we must not shirk our responsibility for security or hand it to others,” Cameron said.

“Throughout our history the United Kingdom has stood up to defend our values and our way of life. We can and we must do so again and I commend this statement to the House,” he added.