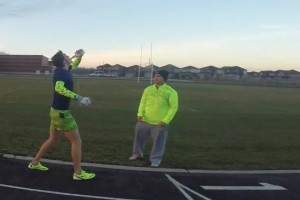 Canadian Lewis Kent broke his own world record for running the beer mile and went on to celebrate by announcing a shoe deal with running company Brooks. The 22-year-old University of Western Ontario student achieved a new record in the beer mile, which involves running a mile on a 400-meter track while drinking a beer at the start of every lap, by completing the event in four minutes and 51 seconds on Tuesday.

A video posted to YouTube depicts his attempt at the record, which is currently up for ratification by BeerMile.com. Following his record-breaking performance, ESPN reported that Kent announced a merchandise deal with running apparel company Brooks. Marketing manger for Brooks Canada Jenine Lafayette didn’t provide specific details for the unprecedented deal, but she did tell ESPN that the deal would last two years and would pay Kent, “more than we would pay an amateur athlete and less than we would pay an Olympian.”

The deal marks the first official endorsement of a beer mile athlete and could contribute to the growth of the sport. “I think, over the past couple of years, the beer mile has gone from something collegiate runners did to something more serious,” sports marketing agent Kris Mychasiw said. Kent, who held the previous record for the beer mile at four minutes and 55 seconds and won the Beer Mile World classic, expressed his own disbelief at his accomplishments.