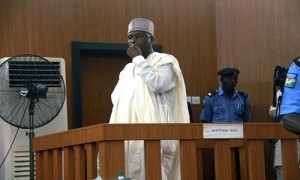 The lawyers representing Senate President, Dr Bukola Saraki, at the Code of Conduct Tribunal over alleged false declaration of assets, yesterday, walked out of the court abandoning the Senate president in the dock.

The defence lawyers, comprising three Senior Advocates of Nigeria and 24 other lawyers staged a walk-out following the refusal of the tribunal chairman, Justice Danladi Umar to suspend the trial until Saraki’s appeal before the Supreme Court is determined.

Saraki’s lawyers accused the tribunal of engaging in an act of “judicial rascality”, by refusing to accord respect to the apex court which they said was already seized of the facts of the case, saying they would not take part in an “illegal proceeding”.

Speaking from the dock after all his lawyers had left, Saraki told the court that he had limited knowledge of the legal system, even as he begged for time to seek legal assistance.

“Mr. Chairman, I find myself in a new terrain. Firstly is the fact that my lawyers walked out on me. I need time to go and beg them to come back and in any event that they refuse, I need to look for best hands to defend me. I need to ask them why they did what they did today (yesterday). If they refuse to come back I will then know where to go from there,” Saraki pleaded.

Justice Umar adjourned the case till November 19 for hearing. He also berated Saraki’s legal team, saying “the action of the defendant’s team smacked of disrespect”.