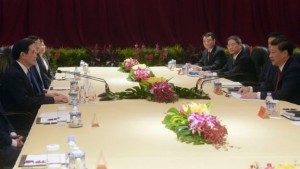 Leaders of political rivals Taiwan and China have met for the first time in more than 60 years for talks that come amid rising anti-Beijing sentiment on the self-ruled island and just weeks ahead of elections. China’s President Xi Jinping and his Taiwanese counterpart, Ma Ying-jeou, shook hands at the start of the summit in Singapore on Saturday.

Before the leaders entered a closed meeting, Xi said the two sides are “one family” and cannot be pulled apart. Ma responded by telling Xi the two sides should observe mutual respect after decades of hostility and rivalry and “respect each other’s values and way of life”.

“Even though this is the first meeting, we feel like old friends. Behind us is history stretching for 60 years,” he said. “Now, before our eyes, there are fruits of conciliation instead of confrontation.”  It was the first such summit since China’s civil war ended in 1949.

The talks come ahead of presidential and parliamentary elections in Taiwan, in which the independence-leaning Democratic Progressive Party (DPP) is favoured to win, something Beijing wants to avoid. The ruling Nationalists, also known as the Kuomintang (KMT), retreated to Taiwan after losing the civil war to the communists, who are still in charge in Beijing.