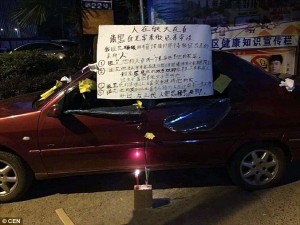 A car owner in Kunming, southwest China, has come up with an unusual way to punish the vandal who dared smash his car window – he actually set up an elaborate shrine around his car and asked the gods of the underworld to curse him. The man, known simply as Wang, appears to have decided on the bizarre ritual after the police failed to find the culprit. He told local media that he has parked his car in the same spot place near where he runs his barbecue stall for over a decade. He’s never had a problem before, not until earlier last month.

When Wang arrived to set up his stall on the morning of October 12, he found that his car’s window had been smashed during the night. A surveillance video later obtained by the police showed a man getting out of a silver car and repeatedly striking Wang’s windows with a long umbrella. The incident took place at around 5.30 that morning.

Wang claims to know the man; he says it’s someone he had an argument with just days before the incident took place. But the accused person denied everything, and there was no way for the police to prove that he was the man in the video. After a month of investigations, the culprit still hadn’t been apprehended.  “I went to the garage to ask about fixing the car,” Wang said. “It will cost more than 7,000 Yuan. I was planning to go and get it fixed after the police find the man who did it but now I feel there’s no hope.”