A supposed convert who went to a church in search of a wife material has ended up stealing the vehicle of a pastor of the church, Crime Reports has gathered. The culprit’s deed was exposed after he was arrested by the Oyo State Police Command recently. 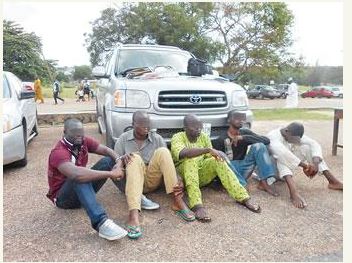 It was learnt that the principal suspect, Wasiu Adetunji Lawal, led a criminal gang which stock in trade was to obtain cars from their owners under false pretences, only to divert and sell them. Other members of the gang named by the police include Wasiu Adetunji Lawal, Isiaka Babatunde, Jamiu Rahman, Wasiu Adelani and Abdulazeez Ahmed.

Disclosing the arrest to Crime Reports recently during a press briefing, the Commissioner of Police in Oyo State, Leye Oyebade said that Lawal went away with the Toyota Sequia SUV belonging to one Pastor John Akorede Aderounmu under the pretext that he wanted to carry out some repairs, only to abscond with the vehicle.

“The suspect sold the vehicle to a criminal receiver in Kaduna State without the knowledge and the consent of the owner, and refused to respond to the owner’s calls when he demanded for the return of his vehicle.” Oyebade stated, adding that this led to police investigation into the whereabouts of Lawal and the vehicle.

The police commissioner further said that when Lawal was arrested, he confessed to have sold the vehicle, leading to the arrest of other suspects. Exhibits recovered from the gang include a Toyota Sequiao SUV, 13 vehicle particulars, nine forged Customs paper, number plate with registration number BH 299 BKA and other documents.

Oyebade said that his command was not unmindful of the fact that crime wave usually increases whenever the end of the year is approaching, adding: “This is why we have put various security strategies in place to curtail the activities of criminals within the state before, during and after the yuletide. It was the positive result of the strategies that led to the arrest of these criminals.”

In an interview, the suspect, Lawal, told Crime Reports that it was the victim who asked him to sell the vehicle and he had given him an additional N400,000 to add to the N800,000 which he realised from the sale, for him to buy a new one for the victim who believed his claim that he was a dealer.

He confirmed that Pastor Aderounmu was calling him but he could not respond because of a problem he did not disclose.

But the victim, Aderounmu, told Crime Reports that “the suspect (Lawal) came to our church, looking for a lady to marry. After a while, he got close to me. One day, he said he wanted to help me repair something in my car. He had earlier said that he was an auto dealer.

“He disappeared with my vehicle for three months before it was recovered from the person he sold it to in Kaduna. Before his arrest, I called him severally but he always told me that he would soon bring the car, unknown to me that he had already sold it. I never instructed him to sell the car as he claimed.”