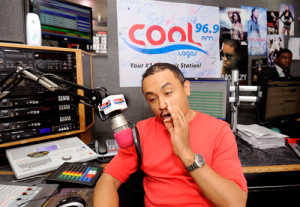 This comes after a very messy and public split from his former wife Opeyemi Olarinde.

The veteran OAP shared a photo of him holding hands with girlfriend Benedicta on his Instagram and also a mighty engagement ring is very noticeable on her finger.

“A picture they say, is worth a thousand words!” wrote Freeze as the caption of the picture.

Freeze claimed he was a victim of domestic abuse, and his wife physically abused him when they were married.

He released photos of him with cuts and allegedly said it was his former wife who injured him.