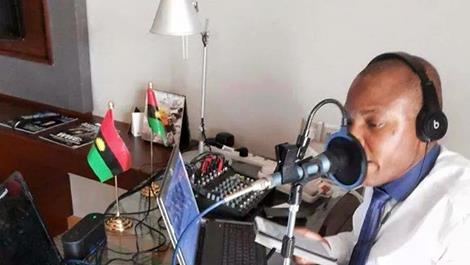 The Department of State Services, DSS, has been ordered by an Abuja Chief Magistrate’s court to produce the detained director of the pirate radio station, Radio Biafra, Nnamdi Kanu, on November 23.

Mr. Kanu is also coordinator of the Indigenous People of Biafra (IPOB), whose members have been staging mass protests across most states of the Southeast, demanding his release.

Kanu’s trial before the court on charges of conspiracy, belonging to an unlawful society and intimidation, was stalled Wednesday due to his absence from court.

While ordering the DSS to produce the accused unfailingly by next week Monday, Magistrate Shuaibu Usman said a criminal trial cannot be heard if the accused person is not in court.