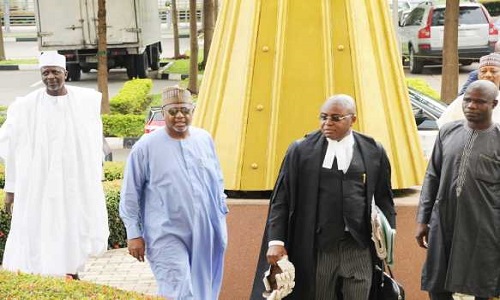 The Judge, Justice Adeniyi Ademola, who adjourned the case following an oral application from the Solicitor-General of the Federation, Mr Taiwo Abidogun.

Ademola held that the adjournment would enable the Attorney General of the Federation appear and explain the siege on Dasuki’s Abuja residence.

Abidogun, who appeared for the first time on Dasuki’s case, had told the court that the attorney-general and Minister of Justice had just been sworn-in.

He told the court that he needed time to study the case and to enable him brief the minister on the matter.

The solicitor-general informed the court that the minister had yet to assume office.

He said that the minister would assume office on Wednesday, Nov. 18 and would be briefed about Dasuki’s case.

He, therefore, urged the court to allow them to appear on Monday.