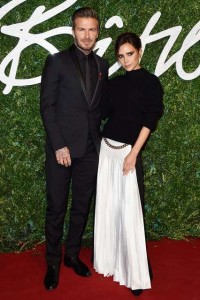 World famous retired soccer star, David Beckham was overly excited and proud of his wife after she won the ‘Glamour Woman of the Year 2015’ award.

In an Instagram post, the former English player gushed about his fashionista wife as she won the ‘Glamour Woman of the Year 2015’ award.

Beckham took to his Instagram on Monday night (November 9) congratulating Victoria for a win well deserved.

“Congratulations to the most amazing mother for the woman of the year award… Truly well deserved”, he wrote beneath a picture of the former Spice Girl giving her acceptance speech in the Carnegie Hall in New York City.

The mother-of-four beat Caitlyn Jenner to become this year’s big winner and was handed over her award by her eldest son, Brooklyn Beckham.

The 41-year-old fashion designer was one of many women being honored  for their powerful voices and work in the world.

“I’m spending a lot of time in Africa working very closely with the U.N., speaking on behalf of the incredible women that I’m working with and it took me getting to 40 years old to realize I