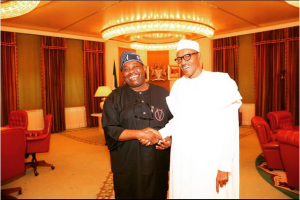 The worst thing that can happen to a leader is not having close associates that can tell him the truth. Founder of Ovation magazine and erstwhile presidential aspirant, Dele Momodu may not be the closest to President Muhammadu Buhari, but he is definitely one of the few that tells him the bitter truth, at least in the media.

Momodu’s latest letter to President Buhari laments the situation of things from wastage to lack of economic plan and inability to end Boko Haram insurgency as promised.

Your Excellency, it’s been months since I wrote my desperate memo to you. I wish to thank you once more for reacting promptly and swiftly at that time and for giving me the honour and privilege of meeting you in your office. I remember presenting you a special compilation of my articles, especially the many admonitions to your immediate predecessor, President Goodluck Ebele Jonathan.

After handing over the book to you, Sir, I promised to continue acting in my self-appointed capacity as Special Adviser because of the need to tell you what those very close to you might not be able to say. They might be afraid of you and your reaction.

The truth is you are a plain and simple man imbued with a mission and a passion to save this great country but you cannot do it on your own. You can only do it if people close to you, who should be advising you, tell you as it is so that you can do that which you were elected to do.

Sir, it is on the above basis that I’m back today for reasons some of which you probably know already from your own personal observations and readings. But before I go further, kindly permit me to set some records straight before some conspiracy specialists step forward to ascribe other people’s opinion to me. I shall clearly expose my personal views and state where I belong or stand for any avoidance of doubt. Everywhere I go people refer to me as Buhari’s man and ask “what’s your Baba doing ooo?”. I seriously have no problem with that. I’m proud that I joined so many other Nigerians as well as foreign friends in supporting a man of impeccable pedigree and solid integrity. No matter your view of President Muhammadu Buhari, one thing his bitterest enemies give to him is the fact that he is way above the level of most mortals in matters of uprightness.

This is why many of us volunteered to scream your name to high heavens and we were ready to follow you to Golgotha. Many of your opponents have not gotten over the thrashing you gave them and would forever seek everything and anything to smear you with. It is therefore not surprising that there has been so much noise about what you’ve done or left undone. Whether they are right or wrong in their assessment, I feel it is right and proper to let you know what people are saying about you including your most ardent fans and supporters. Sir, please, let’s not dismiss them as mere rabble-rousers. A groundswell of public opinion can easily metamorphose into an ocean of disenchantment and cataclysmic confusion. In short, I believe your enemies are skilfully setting you up for failure in order to be able to taunt your supporters later by saying we “we told you so!” In this regard it is pertinent to always bear in mind the Yoruba saying ‘ehin kunle l’ota wa, ile ni a se ni ngbe’! Loosely translated it means “the enemy lurk outside in the backyard but your foe resides inside your house.”

What is the matter this time? Many Nigerians are lamenting that the change you promised them is fast becoming a mirage. It is certainly not what they are seeing right now. They insist that your style and methodology appear too slow for a nation in dire straits and in need of urgent and miraculous deliverance. They are not happy that you are no longer the prudent man they used to know. They think you’ve already capitulated by frolicking with members of the bourgeois class and junketing around the world while Nigeria burns like Dante’s inferno. They are miffed that you are still keeping the Presidential fleet when you are supposed to have sold most of them off, if not all. They are worried that the mandate of four years they gave you is being unwittingly frittered away and before you know it all the goodwill you garnered would have evaporated and vamoosed. Time, they say, waits for no man!

The economy and the free fall of the Naira have become worrisome. There are all manner of rumours that may make matters worse, if true, about the current state and status of our banks. Though the Central Bank of Nigeria has come out forcefully to dispel the dangerous rumours, they want you to unleash your economic master-plan as soon as possible, so that what was once a baseless rumour does not somehow become harsh reality. They are expecting a blue-print that would guarantee a farewell to poverty. On this I agree with the opinion that something drastic has to be conjured up to arrest this drift to perdition. Nothing amplifies this monumental tragedy than the debit card fiasco which stipulates that Nigerians cannot live in a civilised world by walking into any international hotel or shop of their choice and paying with their cards. This is terribly depressing.

What this means in plain terms is that Nigerians must patronise the black market and run the risk of carrying cash recklessly whenever they travel abroad. It makes a mockery of the cashless society that the CBN has fought so hard to put in place and jeopardises your fight against corruption because government officials who travel abroad must of necessity carry large sums of cash if they are not to be embarrassed or even disgraced. Sir, the most important thing is that this is not healthy at all. The last thing your Government should be telling the world is that we are so broke that we are on our knees. The world laughs at us and treats us with derision because we have resources other than crude oil which should make us one of the richest in the world if we properly harness them. We must stop giving the impression that we are so impoverished when it is leadership, brigandage and a lack of focus that has failed us.

The other matter that continues to embarrass Nigerians is the issue of Boko Haram. The matter is made worse by the fact that you are a retired army General who should know and have what it takes to drastically reduce if not exterminate the cankerworm. But rather the menace has exacerbated. It has snowballed into a seemingly unquenchable conflagration. I had argued repeatedly that the military alone cannot achieve this result. Intelligence seems to be the key word here. Also identifying and locating some of the cells and prominent sympathisers is crucial. Those who arrogantly and naively say that no form of negotiation should take place are very far from the theatre of war. They have probably not heard of a group called IRA, the Irish Republican Army, that terrorised Great Britain for God knows how many years. I and my directors at Ovation International were lucky to escape a massive explosion that shattered the peace and tranquillity of London Docklands when a bomb went off inside the South Quay light rail station which was next to our office at Beaufort Court. The battle of wits and the war of attrition had to be fought using the carrot and the stick approach. It was the carrot approach that eventually succeeded and the United Kingdom has now been rid of that hitherto interminable scourge for many years!

The Boko Haram issue has defied every effort made so far and it is time to expand the options for the sake of our fellow citizens in the heart of this conundrum. When over 200 girls vanished into thin air, we were so sure they would return very soon but that has remained an illusion. This should tell us that this issue is not a joke and that we need to keep all windows open. Sir, Nigerians want to see government show a different approach and better compassion than what we had in the past. They are waiting to see how you will do this with minimum collateral damage.

Sir, you have a herculean task ahead but it is not a mission impossible. Other nations are experiencing almost similar challenges and they are forging ahead. The first indicator to exhibit our seriousness is when we stop the business as usual syndrome and tighten the belts of government officials and politicians. If the idea is to continue along the path of profligacy then Nigeria is contagiously jinxed. The Republic of Tanzania has already taken the lead. I will publish a report that has already gone viral below this letter as a veritable example of what is possible.

I wish you well as always Sir.