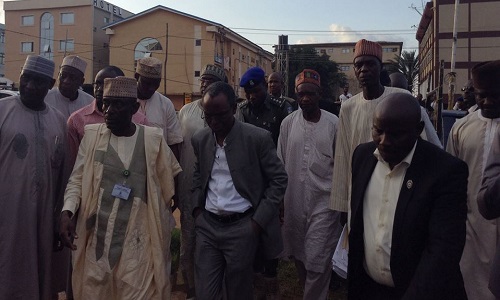 Governor of Kaduna State, Malam Nasir El-Rufai, has insisted on demolishing the buildings that encroached into lands belonging to Government College and Rimi College in Kaduna, saying those with genuine titles whose property are affected, have started receiving their letters of relocation.

Speaking during a tour of Government College and its environs at the weekend, the governor explained that boarding facilities for students and quarters for staff could not co-exist with private dwellings and directed that all private property within Government College be valued so that appropriate compensation would be paid to those with valid titles and planning approval.

In addition to the compensation, Gov. El-Rufai said the affected title owners would also be given replacement, stressing that the process of land recovery in Kaduna has to take into account the need to conduct valuation on property with valid title.

Mr. El-Rufai said similar instructions had been given in respect of Rimi College, which used to be an iconic boarding school, but whose facilities had been encroached upon by private interests and public institutions.

The Kaduna governor said formal notices to relocate, with deadlines, would be dispatched to all the government agencies that are currently accommodated on school premises.

He said government agencies in Rimi College had already received their relocation notices, adding that their departure will enable the government prepare the school facilities to receive boarding students.