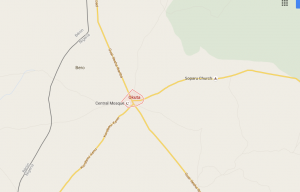 The Emir of Okuta, Kwara State Alhaji Idris Serio Abubakar, has confirmed the illegal activities of Benin Republic on Nigerian soil that made it seem like the country was trying to annex some Nigerian villages at the border.

According to a report by Vanguard, 16 villages in Okuta, the border town in Baruten Local Government Area of Kwara State, had been invaded by Benin Republic. The country had gone ahead to construct offices for its gendarmerie (Police station) in the affected communities and also hoisted the country’s flag.

Emir Abubakar told journalists that the development had led the Okuta Emirate Council to order the people of Yakparu axis to dismantle the Beninoise flag hoisted in the villages, adding that the flag was currently in the custody of the emirate council in the town.

The monarch appealed to Kwara and Federal Governments to come to the aid of the people of Okuta villages as residents now lived in fear of possible attack.

According to him, Nigerian teachers, dispensary workers and Immigration officials in Ogomue had been sent packing from the Nigerian villages by Benin Republic officials.

He also called on President Muhammadu Buhari to intervene in the issue before it gets out of hand.

The Emir recalled that during the government of President Ibrahim Babangida, the gendarmes attempted their encroachment move, claimed ownership of Ogomue, a village under Boriya of Okuta district in Baruten local government council of the state. Then military governor of Kwara State, Lt. Col. Ahmed Abdullahi, and the then Commander of 22 Armoured Brigade, Ilorin, Col. Ojokojo subsequently visited the area. Nigerian flag was hoisted at Ogomue and a primary school, a dispensary and Immigration post were constructed by the Nigerian authorities to give the villagers a sense of belonging.

However, the Gendarmes who had fled the area since then are back and have removed the Nigerian flag and hoisted the Benin flag and constructed Gendarmes office.

The issue has not been taken seriously by the Nigerian government so far, as Vanguard reported that during its attempt to get the reaction of the presidency on the issue, it was directed to the Minister of Information, Alhaji Lai Mohammed, who in turn directed the newspaper to the Police.

Reacting, Kwara State Police Public Relations Officer, Mr Ajayi Okasanmi said: “the State Police Command has not been officially informed of the invasion by the Benin Republic. But now that we have been informed, the Command will act immediately and contact the nearest police station to the communities to get feedback. We will then decide what to do next”.