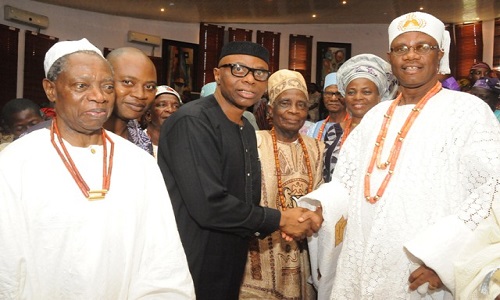 The title of Eze Ndigbo in the South-West is a calculated attempt to embarrass the Yoruba traditional rulers and desecrate their traditional institution, the Ondo State Council of Obas has said.

This position by the Obas came on the heels of the recent highly publicized spat between the Deji of Akure, Oba Ogunlade Aladetoyinbo and the Eze Ndigbo of Ondo State, Sir Gregory Iloehike.

In a communiqué issued by the council in Akure after its monthly meeting, the Obas described the trend as “an affront on the state traditional rulers”.

They, therefore, stated that the title should be prohibited in the state and that there should not be any Ndigbo chieftaincy title for leaders of Igbo or other ethnic groups in the state.

The council stressed that the use of titles such as Eze, Igwe, Obi or any other synonym is not acceptable in the state and that the only chieftaincy title that would be recognized is the one bestowed by the traditional ruler in the state on Igbo indigenes such as chairman or president or leader of Igbo indigenes.

It noted that efforts had been made in the past by several Igbo leaders residing in the state to assume the Eze Ndigbo title but such moves have always been resisted.

The Obas declared: “The continued use of Eze Ndigbo chieftaincy title and flaunting of paraphernalia of Ndigbo traditional institution in Ondo State is a calculated attempt to embarrass the Yoruba traditional rulers.

The communique said that the issue of Eze Ndigbo chieftaincy title in Ondo State, which is the title of traditional rulers in Igbo communities, is alien to Yoruba and tradition.

“It is a way of arrogating to the Igbo leaders the traditional power and equating themselves to Yoruba Obas”, it said.

They also pointed out that it is forbidden under the extant Chiefs Law for any person who is not a recognized Oba in Ondo State to wear a crown, costume or any other paraphernalia of an Oba.

“It is an infraction of the penal law and indeed the Chiefs Law in Ondo State for any person to parade himself as either a minor chief or recognized chief without the requisite approval of the prescribed authority or the State Executive Council as the case may be”, they said.

The Council therefore warned that; “Whoever wants to be a traditional ruler among the Igbos or any other ethnic groups should go to his domain for such dispensation”.