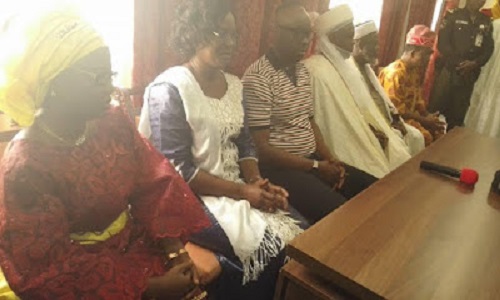 The Sultan of Sokoto and President General, Nigerian Supreme Council for Islamic Affairs, Alhaji Muhammad Sa’ad Abubakar III, has appealed to political office holders to continue to carry the people along in their actions and policies in order to enjoy the support of the electorate.

The Sultan spoke just as Governor Ayodele Fayose of Ekiti State called on His Eminence to wade into the continued incarceration of the former National Security Adviser, Col. Sambo Dasuki (rtd) and ensure that he is allowed to travel overseas as ordered by the Federal High Court, Abuja, to attend to his failing health.

The duo spoke in Ado Ekiti, the Ekiti state capital Friday, during a courtesy call on the governor by the Sultan, who is in the state for the investiture of the Chief Imam of Ekiti, Alhaji Jamiu Kewulere, as the President General, League of Imams in the South West, Edo and Delta states.

The Sultan was quoted as saying “You cannot be a leader without the people” adding that “When God gives you a position of leadership, it is a great opportunity given by God because God believes in leadership”.

Abubakar, therefore, urged the political class to put politics aside soon as the elections are over and join hands together to ensure security for the people.