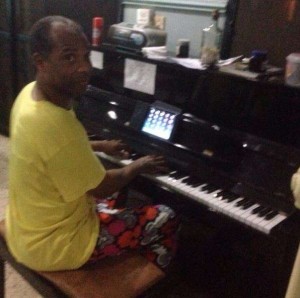 Afro-beat legacy, Femi Kuti is thankfully going to be back to work on December 3 when he will be performing at the New Afrikan Shrine after fully recuperating from his hernia operation.

The multiple Grammy nominee was recently pictured playing the piano at his home as he is currently recuperating..

“Thank you for your well wishes, Ambassador Femi Anikulapo-Kuti is up and doing well. We hereby use this opportunity to notify you that the Positive Force Band will resume on the 3rd of December 2015.Arararara!!!” read the caption.

Femi Kuti underwent a successful hernia operation last weekend; as a result of his health issues he has not been able to perform his weekly Sunday Jump at the New Afrikan Shrine.

On November 22, Femi Kuti’s sister shared a photo of the musician on a hospital bed after his surgery.

“Femi Kuti after the operation. Smiling, high on morphine. It’s a morphine thing” she wrote in the caption of the picture.