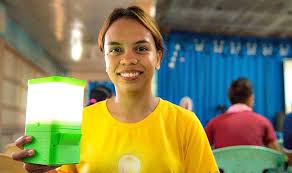 Meet a Filipino architect and scientist who invented a revolutionary lamp that runs on a glass of saltwater instead of batteries. Her vision in creating the SALt (Sustainable Alternative Lighting) lamp was to “light up the rest of the Philippines sustainably,” by finding an environment-friendly alternative light source suitable for people in coastal areas. She came up with the idea after spending time with the locals of the Butbut tribe in the Kalinga Province of Philippines, who had no access to electricity.

The lamp can apparently run for eight hours on just two tablespoons of salt and a glass of water. “It is made of tediously experimented and improved chemical compounds, catalysts, and metal alloys that when submerged in electrolytes will generate electricity,” Mijeno explained. The idea behind it is the chemical conversion of energy, but while it works on the scientific principle of the galvanic cell, it makes use of a harmless, non-toxic saline solution instead of hazardous electrolytes.

This saltwater lamp not only makes lighting available to remote areas, it’s also a lot cheaper than conventional kerosene or electric lamps, considerably safer since it does not have components and compounds that may spark fire, and, most importantly, it’s environment-friendly since it does not emit toxic gases and leaves a minimal carbon footprint.“This isn’t just a product,” Mijeno said. “It’s a social movement.”

Although the SALt lamp isn’t being mass produced yet, it has received global recognition. Mijeno has won several awards and competitions in Philippines, Japan, Singapore, and South Korea for the work that she put into the device. And The New York Times reported that she recently attended a discussion of climate change hosted by President Obama, where she spoke about the SALt lamp in detail. He called her venture a “splendid thought”, while referring to her as “the perfect example of young entrepreneurs coming up with leapfrog technology.”