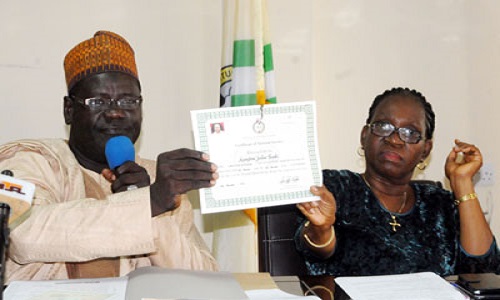 Seventeen suspects with fake certificates of exemption and exclusion have been discovered by the National Youth Service Corps (NYSC).

Three of the suspects using the certificates to work in one of the financial institutions, the NYSC management said, were on the run while four others have been handed over to security agents for prosecution.

Speaking at the handing over in Abuja, the NYSC Director of Certification, Alhaji Hudu Aliyu Taura, said the arrest was made possible through the cooperation of the suspects’ employers, who requested verification of their certificates.

Following the verification exercise carried out by the NYSC, Taura said 17 of the certificates were discovered to be fake.

He vowed that the remaining people and those on the run would soon be arrested.

Taura said it had become necessary for employers of labour to check with the NYSC to ascertain the genuineness of certificates submitted to them by applicants.

Responding to a question if there was no inside collaboration in the fake certificates saga, he said: “No! No NYSC staff was involved. They have mentioned the name of the person, their bank account and the amount they paid”.