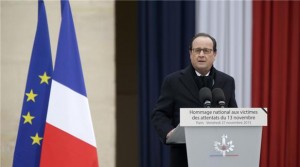 France mourns the 130 people killed in the November 13 Paris attacks, with President Francois Hollande leading a solemn ceremony in honour of the victims. Families of those killed in the attacks, claimed by the Islamic State of Iraq and the Levant (ISIL) group, joined some of the wounded at ceremonies on Friday at the Invalides, the gilded 17th-century complex in central Paris that houses a military hospital and museum and Napoleon’s tomb.

The tribute will be “national and republican”, an official at the Elysee presidential palace said, referring to the French republic’s creed of liberty, equality and fraternity. “It will take place in sobriety and solemnity, reflected by the beauty of the surroundings.” Hollande will break from a whirlwind diplomatic bid to build a broad military coalition to defeat ISIL. The marathon has taken him from Paris to Washington to Moscow in just a few days.

He is expected to make a 20-minute address at the one-hour ceremony, which will be shown live on television. In the run-up to the commemoration, Hollande called on the French to hang out the Tricolour: “Every French citizen can take part [in the tribute] by taking the opportunity to deck their home with a blue, white and red flag, the colours of France,” government spokesman Stephane Le Foll quoted Hollande as saying.