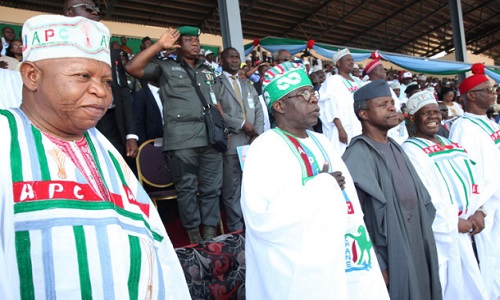 The Peoples Democratic Party in Osun State on Thursday said it had uncovered an alleged plan by the state governor, Rauf Aregbesola, to deploy 15,000 persons to Kogi State with the intent of rigging the elections in favour of the All Progressives Congress.

A statement on Thursday by the party’s spokesperson, Diran Odeyemi, said the plot was to use voters from Osun State who are APC members, to garner votes for the APC candidate, Prince Abubakar Audu in Saturday’s governorship election.

The statement said 15,000 APC members from Osun had been mobilized and would be deployed to the different local government areas in the state, particularly those where Mr. Audu is popular.

“We want the Inspector General of Police, IGP, Mr. Solomon Arase and the Director General of the Department of the State Security, DSS, Mr Kifasi to immediately act on this information and prevent the move by Osun governor to storm Kogi with APC members from Osun”, the statement said.

“We want to recall the arrest of some APC members from Osun state led by the Senior Special Assistant to Governor Aregbesola on Inter Governmental Affairs, Mr. Waheed Lawal, on the eve of the 2014 Anambra state governorship poll by the eagle-eyed men of DSS in Imo state enroute Anambra state.

“It should not also be forgotten the role played by Aregbesola in the failed efforts to unseat Governor Segun Mimiko in 2002 Ondo governorship poll and his financial efforts to return Dr. Kayode Fayemi to office as Ekiti state governor for another term last year June”,

Mr. Odeyemi, therefore, called on President Muhammadu Buhari to impress it on security agencies to remain neutral in the discharge of their duties, adding that the gains recorded since the return of democracy in 1999 should not be allowed to be rubbished by a few persons in power.

The Osun PDP also called on eligible voters and stakeholder’s in Kogi state to be vigilant and report any suspicious person to law enforcement agents.