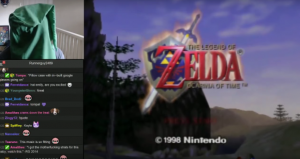 Drew Wissler, a.k.a Runnerguy2489, is the new superstar of the gaming world for his impressive feat of completing an entire video game (with all its levels and challenges) blindfolded. After 103 hours of sightless gameplay, he finally defeated the classic game The Legend of Zelda: Ocarina of Time on October 14. Thousands of fans who watched the live stream were overcome with emotion after the monumental finish. Wissler himself reported that he “couldn’t stop shaking”.

Wissler, a speedrunning champion, was always obsessed with how quickly he could zip through video games. “I’m a runner in real life so I always compare it with that. How fast I can go,” the young civil engineer said. It wasn’t until 2007, when he came across a blind player looking for help to complete Ocarina of Time that he got interested in blindfolded play. “It seemed a neat challenge and I thought I could help him out,” he said.

So he spent several hours per week understanding the game – which he had already mastered – from a blind person’s perspective. As he mapped out a sightless path through the game, relying solely on his memory, he came to understand and appreciate it in new ways. He learned to pick up audio clues that he previously had not even noticed. “It showed how detailed the game really was,” Wissler said. “I had done a lot of speedrunning and knew the game very well, but there’s a lot of audio things you overlook as a sighted person.”

As Wissler taught himself new techniques, he gradually progressed through the game and was eventually able to complete it from start to finish without sight. But he wasn’t satisfied, because he’d left out many of the optional challenges included in Ocarina of Time. He wanted to beat the entire game, with 100% completion, collecting all the items and finishing all the side quests. So he decided to attempt it in snippets, live streaming his progress every Wednesday for his fans across the world. He started in 2014, and the last live stream of the ‘Ocarina of Time100% Blindfolded Challenge’ aired a year later, on October 14, 2015. He’d successfully completed the seemingly impossible challenge.